Our plan was to start the expedition on 1 June 2016, but it seems more likely we’ll now be flying down to Huambo and then starting from the source on Monday 6 June 2016. I’ve just re-read my post from two and a half months ago, and thought now was time for an update on how all the expedition preparation is going!

I’m happy with the amount I’ve been able to pack in. With the help of Gavin at The London Kayak Company  I’ve clocked a fair few kilometres on the river, from their base near Morden Wharf all the way into central London. It was tough, especially when battling against the tide, but definitely useful! Also did a couple of water safety and rescue sessions over at Lee Valley Whitewater Centre on the 2012 Olympic course. Turns out swimming in whitewater is just as hard as it looks!

Paired with some sadistic strength and conditioning sessions over at The MMA Clinic in Angel (courtesy of Wayne) and ramping up my cardio with midday Brazilian Jiu Jitsu sessions with Michael Russel, I think I’m ready for whatever the Kwanza has to throw at me. Even managed to get a few hikes in with weight, to try out the sexy new Osprey rucksack.

Twitter account has gone from strength to strength. We hit our target of 500 followers, then 1000, and are currently on 1300. Alfy has actually done a lot more of the Tweeting than me recently, and has done a great job of choosing engaging topics and images for our followers. Still not much action on the Facebook front beyond mirroring what is going on on Twitter. Our online presence has attracted some positive attention, leading to a few interviews and news articles, such as this recent one for the Landmines in Africa Blog. I’m also pleased to say we’ve got loads of support from Luanda International School. I’ll be heading there next week to give a talk to students and parents about our expedition, and a pair of Year 6 students even interviewed us recently for a project on landmines in Angola. They’ve even decked out the school grounds with a kayak and mine hazard signs to drum up support!

In terms of timings, we still seem to be aiming to smash out the whole expedition in 30 days, but I think we’ve both accepted that’s wildly optimistic! We now have ground support from The HALO Trust sorted for a section of the journey, and are still in the process of talking to local authorities about permits and helicopter evacuation. I have a meeting at the Angolan Embassy in London to discuss our plan this Friday, and hopefully get some official support (don’t worry, they’ve already given me the visa!)

That’s it from me for now. Might check in again after I’ve touched down in Luanda next week.

P.S. We are currently at 54% of our fundraising target. If you are keen to donate and help pay for a demining team to do a month of work in Cuito Cuanavale, then please click through to our JustGiving page. 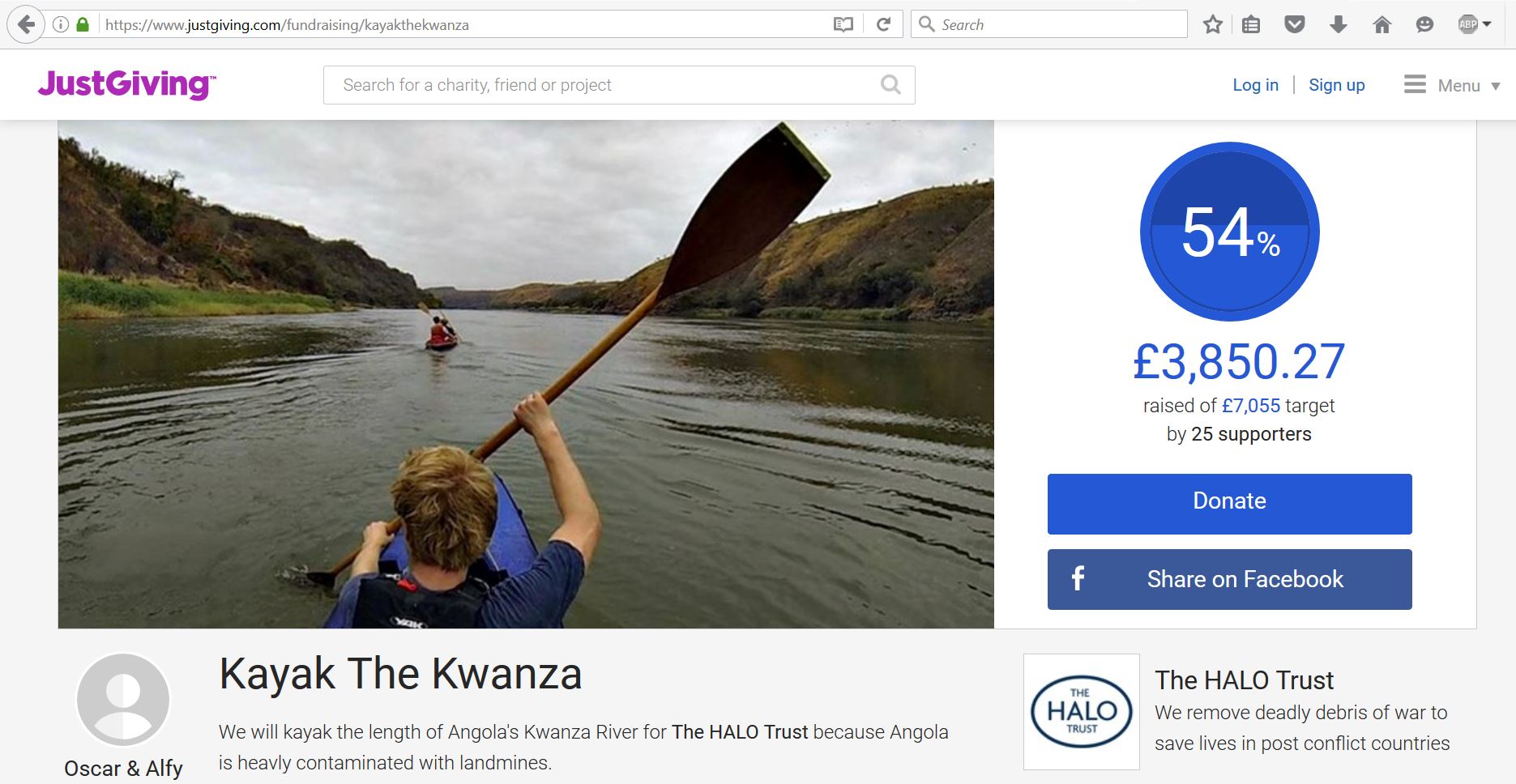